Bitcoin (BTC) could be positioning for a big move higher if history is any guide, with a recent upswing paralleling the bull revival of mid-2019 that saw the price surge by almost 250%.

The leading cryptocurrency by market value has jumped nearly 40% to $23,000 this month, according to CoinDesk data. The rally follows a yearlong swoon that knocked 68% off the price followed by prolonged consolidation at the depths of the bear market around $18,000 and comes as the U.S. Federal Reserve (Fed) nears the tail-end of its liquidity tightening cycle that roiled risk assets, including cryptocurrencies.

The conditions echo those that preceded bitcoin’s bull revival in the second-quarter 2019. Then, the price surged 247% to $13,800 as the Fed’s tightening cycle peaked.

“During the four months prior to the 2019 rally, BTC traded in a tight range near the lows, as shorts pressed their advantage while strong hands accumulated,” macro trader Geo Chen said in the Jan. 20 edition of his popular Fidenza Macro Substack-based newsletter, noting commonalities between 2019’s price surge and 2023’s. “The 2019 rally coincided with a Goldilocks environment of slowing growth and inflation, which caused the Fed to take its foot off the tightening pedal.”

The Fed’s previous tightening cycle lasted three years, starting December 2015 and ending December 2018 and lifted the benchmark borrowing rate to the 2.25%-2.5% range. Last year, the central bank raised the benchmark borrowing rate from 0% to 4.25%. The market now expects it to slow the pace of rate increases to 25 basis points in February and March and then pause the rate-hike cycle, with forward-looking indicators pointing to a marked slowdown in consumer price inflation and economic activity. 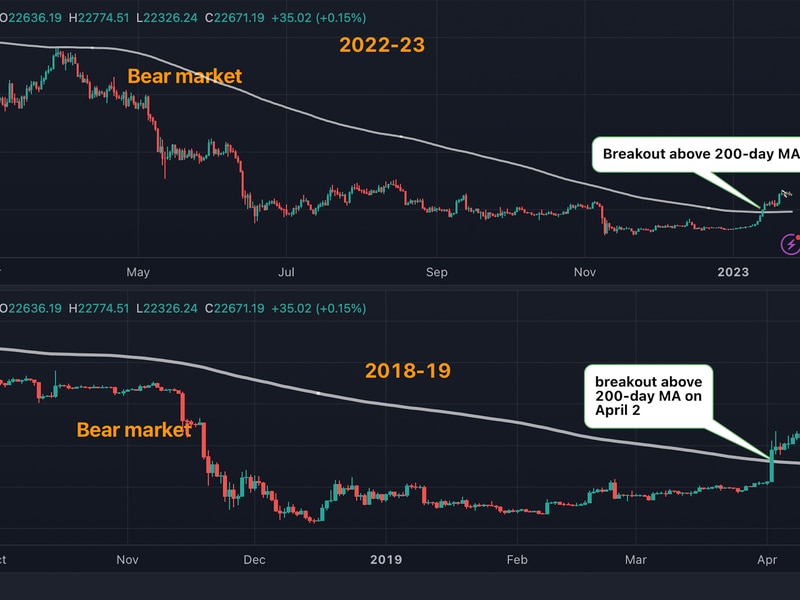 The seller exhaustion seen last November and the subsequent turn higher is consistent with bitcoin’s record of bottoming out 17 months ahead of the mining reward halving and rallying in the year leading up to the event. Bitcoin’s fourth reward halving, a programmed code reducing the pace of supply expansion by 50% every four years, is due around March or April.

All things considered, the path of least resistance for bitcoin appears to be on the higher side. Still, Chen prefers buying ether (ETH), the second-largest cryptocurrency by market value over bitcoin.

“I believe the potential of ETH to outperform BTC due to the Merge has not been fully realized due to the bear market,” Chen noted. “I also believe web 3 and DeFi will continue to be the greatest source of growth and innovation in the crypto ecosystem, and the majority of web 3 and DeFi uses ETH as the base layer. BTC will remain the low-beta safe-haven currency relative to ETH.”

Chen has taken a long position in ETH/USD and expects ether to rally as high as $3,400 in the next three months.

This story originally appeared on Coindesk