Investing in the best long-term stocks in expanding industries is considered an efficient way to build generational wealth. The key to finding success in the stock market is highly correlated with the timing of the investments. For instance, if you had invested $1,000 in the shares of leading EV maker Tesla, Inc. (NASDAQ:TSLA) three years ago, you would have accumulated a sum of $12,500 right now. The sum, however, does not justify the true return potential during this period, as the broader equity market has been under pressure in 2022 due to concerns related to rising inflation and interest rates. In 2022, the S&P 500 Index posted the worst returns for the first six months of a year in over 52 years and reported the highest decline for September since 2002.

The S&P 500 Index has lost nearly 20% of its value since the start of this year and is hovering around the bear market territory. Meanwhile, the tech-heavy NASDAQ Composite Index and the blue-chip-heavy Dow Jones Index have entered the bear market territory as they are down 23.6% and 31.9% YTD, respectively. The companies responsible for leading the market to new highs are now playing a major role in bringing it down. However, this does not mean that all is lost. History shows that when Wall Street has been deep in the red, it has presented a great opportunity for investors to buy the best long-term stocks such as Alphabet Inc. (NASDAQ:GOOGL), Amazon.com, Inc. (NASDAQ:AMZN), and Salesforce, Inc. (NYSE:CRM).

Major market equity indexes have often recovered swiftly from economic downturns and have experienced a strong rally. Growth stocks are the biggest beneficiaries of a stock market rally as these high-beta companies record higher gains than the broader market. Most of the best long-term stocks belong to rapidly growing industries such as artificial intelligence (AI), electric vehicles (EVs), biotech, e-commerce, cloud computing, cybersecurity, and digital advertising. 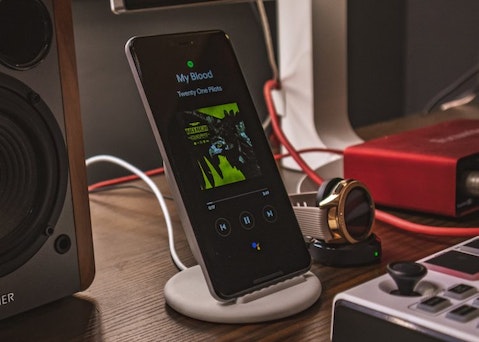 We have shortlisted the 10 best long-term stocks after identifying long-term secular market trends that are expected to gain mainstream prominence in the coming years. These companies are in the best position to leverage these trends through strong competitive advantages and expand significantly in the future. Most of these companies have a significant total addressable market (TAM). We have ranked the stocks according to the level of hedge fund ownership as of Q2 2022.

Upstart Holdings, Inc. (NASDAQ:UPST) is an AI-based fintech company that is looking into revolutionizing credit-giving methods.

Upstart Holdings, Inc. (NASDAQ:UPST) has a proprietary artificial intelligence-based platform that considers a wide range of factors to determine whether credit can be extended. This is important because 80% of Americans have never defaulted on a loan, but still, they do not qualify for a low-interest loan based on their credit score. Upstart Holdings, Inc. (NASDAQ:UPST) has issued $29 billion worth of loans through its proprietary platform to date and has experienced 75% lower defaults than conventional banks.

Upstart Holdings, Inc. (NASDAQ:UPST)  has been adding credit union partners to extend its lending facility to more states in the US. Analysts believe the business is on track to increase its market share significantly. Upstart Holdings, Inc. (NASDAQ:UPST) has been termed the best long-term stock as the company will continue to be appealing as a firm with pure-play exposure to an AI-powered model spreading across credit divisions in the future.

“Upstart Holdings Inc. is an artificial intelligence (AI) and cloud-based lending platform. Upstart’s stock price has been very volatile, but its value has grown steadily. Last year, the company grew its revenue by over 250% organically, which materially exceeded our expectations. In addition, the company continues to generate robust free cash flow and is launching new products to expand its business. Upstart’s value has increased consistently since we first purchased it. Following our discipline, we have added to our position when its stock price has declined and its price to value ratio has improved, and we have reduced our stake when its stock price has risen faster than its value.”

Palantir Technologies Inc. (NYSE:PLTR) is a Denver, Colorado-based data mining company that is driven by AI. The company aids the government and businesses with data gathering and mission planning.

On October 6, it was also announced that Palantir Technologies (NYSE:PLTR) had been chosen by the U.S. Army Materiel Command (AMC) to assist with supply chain optimization and predictive maintenance initiatives. The award is valued at $85.1 million over five years. According to experts, Palantir Technologies’ (NYSE:PLTR) total addressable market will rise to roughly $250 billion by 2024, representing a CAGR of around 20%. These factors merit the company’s inclusion in our list of the best long-term stocks to invest in.

Spotify Technology S.A. (NYSE:SPOT) has a monthly active user (MAU) base of over 433 million as of June 2022 and intends to surpass the one billion level by the end of this decade. The company is also focused on keeping the churn rate low to retain customers. The current churn rate is around the 4% level because of the user-friendly interface and highly engaging and well-curated content.

Recently, Spotify Technology S.A. (NYSE:SPOT) completed the acquisition of Findaway, which operates throughout the audiobook industry. Spotify Technology S.A. (NYSE:SPOT) singled out audiobooks as a key sector for growth and rising client lifetime value. Additionally, the company revealed that it had acquired Sonantic, a dynamic AI speech platform that generates voices from text. These acquisitions are in line with the company’s target of increasing average revenue per user (ARPU) by four times by 2030.

In a research note issued on October 7, Matthew Thornton at Truist gave Spotify Technology S.A. (NYSE:SPOT) stock a target price of $125 and maintained a Buy rating. The analyst has a favorable long-term outlook on Spotify Technology S.A. (NYSE:SPOT) stock due to the higher demand for audio streaming services moving forward and an advertising opportunity related to the industry that is in its infancy.

Shopify Inc. (NYSE:SHOP) is a Canada-based provider of an integrated and easy-to-use e-commerce platform for companies and individuals around the world.

Shopify Inc. (NYSE:SHOP) is being termed as one of the best long-term stocks keeping in view the expanding e-commerce market. According to a report issued by market research firm GuruFocus, 95% of all sales will take place from the e-commerce channel by 2040. Presently, only 14% of the sales are taking place from online channels, and this reflects a significant growth opportunity for Shopify Inc. (NYSE:SHOP).

“The beauty of the public markets is that if you can be patient, there is a good chance the volatility of the marketplace will give you the chance to own companies on your watch list. The stock prices of our 3 new positions (please refer to charts below) have fluctuated from 100-350% over the past 12 months (when comparing 52-week high by 52-week low). Certainly, the underlying value of a business doesn’t fluctuate that much on an annual basis, so the public markets are a fantastic arena to buy businesses if you can sit still without growing tired of sitting still.

Shopify is the company we have been following for a long time, but never had a chance to buy due to its persistent stratospheric valuations (the best companies are never without a huge fan club). The recent sell-off in the stock finally gave us an opportunity to build a core position for our fund.”

Tesla, Inc. (NASDAQ:TSLA) is amongst one of the best long-term stocks capitalizing on the shift from gasoline-powered vehicles to EVs.

Tesla, Inc. (NASDAQ:TSLA) is spearheading the EV revolution through its lineup of vehicles catering to the demand of the residential and commercial consumer base. Tesla, Inc. (NASDAQ:TSLA) is on a strong growth trajectory as it reported an increase in EV deliveries by 42.5% YoY to 343,830 vehicles during Q3 2022. The company has also vertically integrated its offerings to provide the best possible battery technology to consumers.

Baron Funds shared its stance on Tesla, Inc. (NASDAQ:TSLA) in its Q2 2022 investor letter. Here’s what the firm said:

“In 2014, before we began to invest in Tesla (NASDAQ:TSLA), I called Roger to ask whether he thought Elon Musk’s electric car business would succeed. I did not believe that Roger, an owner of dealerships that sell cars powered by internal combustion engines (ICE) would likely have a favorable opinion of Tesla’s prospects. That was principally for two reasons:

Penske Automotive Group is principally an ICE car dealer. Since electric cars are powered by batteries and need little service, franchised dealerships are incented to sell ICE not EV automobiles. Further, Roger had been a long-term director of General Motors. General Motors’ ICE automobile business would be disrupted if Tesla were successful.

Regardless, I was right to have spoken with Roger. That was since he outlined numerous issues we needed to consider, study, and question before we determined whether we believed Tesla could be a successful business…before we ultimately chose whether to invest in that company.

When we completed our initial due diligence on Tesla, which diligence has been ongoing since 2014, we decided to invest $360 million in Tesla over the next two years. I then called Roger and outlined why I thought we could earn 20 times our capital over the next 10 years. Roger was so certain I was wrong that he offered to bet me $1 million that Tesla would fail. “Roger, I can’t bet you a million dollars. First, if you are right, I couldn’t afford to pay you. Second, if I’m right, you’re my friend, and I couldn’t take your money.” We settled on a dinner bet…” (Click here to see the full text)

Click to continue reading and see the 5 Best Long-Term Growth Stocks To Invest In.

Disclose. None. 10 Best Long-Term Growth Stocks To Invest In is originally published on Insider Monkey.

Will Tesla 6x? SOS: The Dark Side of Apple